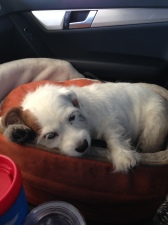 Remember the Disney Classic, Pecos Bill? Pecos Bill and his horse, Widowmaker, were best buddies. Then one day, Pecos Bill met Slue-Foot Sue, and it was love at first sight. Ah, but as is often in life, it wasn’t quite the fairy tale ending. You see, Widowmaker was jealous of Slue-Foot Sue. So, when she insisted on riding him on her wedding day, Widowmaker bucked Slue-Foot Sue so hard that her bustle bounced her uncontrollably higher into the stratosphere.

Being an expert with the lasso, Pecos Bill tried to rescue Slue-Foot Sue with his rope. Surprisingly, he was unsuccessful and watched while she eventually landed on the moon. With Slue-Foot Sue out of reach, Pecos Bill and Widowmaker were best buddies again. (Little did Pecos Bill know that Widowmaker had stood on the rope, thwarting Pecos Bill’s efforts to recover Slue-Foot Sue.)

So, what do Charlee and this Disney Classic have in common? Well, for Grand Jack’s birthday celebration, Charlee and I met him, Nano, and Mac-too (yes, still a naughty puppy) for a morning of shopping. Translation: my mother and I went shopping while my dad sat in his car, dog sitting both dogs. (Happy birthday, Grand Jack. Love, Nano.)

Anyway, recall that on Charlee’s first encounter with Mac-too, her brown eyes turned green with jealousy. (https://lovemydoghatemyelbows.com/2013/07/13/charlees-green-eyes/) And while Charlee hasn’t really wounded Mac-too (yet), she does not miss an opportunity to snap at him. On Grand Jack’s birthday, however, Charlee had Grand Jack exclusively to herself in the front seat of the car, ignoring Mac-too’s Tazmanian Devilish efforts to get her attention.

As the story goes, Grand Jack decided the puppy needed a walk to burn some excess energy. Charlee, still smarting after months now from Mac-too replacing her as Grand Jack’s best buddy, had zero interest in sharing Grand Jack on a walk with the puppy. So, she remained in the car to enjoy the spa-like tranquility of life “sans Mac-too.”

After a few minutes, Grand Jack and Mac-too returned to the car only to find it locked. Grand Jack peered inside to see Charlee, sitting in the front passenger floor with the car keys under her paw much like Widowmaker standing on Pecos Bill’s rope. But sadly for Charlee, Mac-too did not share the same fate as Slue-Foot Sue.

Instead, two AAA trucks and their Good Samaritan drivers were parked near Grand Jack, witnessed his misfortune, and quickly rescued his imprisoned keys from Charlee. With the car now unlocked, Mac-too jumped into the backseat again, thrilled to be reunited with Charlee. Good-natured Grand Jack, impressed with Charlee’s dog dexterity, gave her a pat on the head. (Yes, I know, rewarding bad behavior.) And, while Charlee coveted the petting from Grand Jack, she sighed heavily as she peered into the backseat at Mac-too. No, the moon simply would not be far enough.