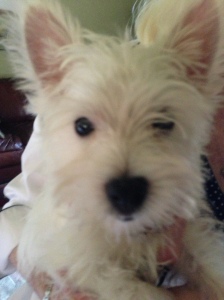 Charlee had a difficult afternoon. Her grandparents, Nano and Grand Jack, dropped in with a surprise – their new puppy, another West Highland Terrier, just six weeks after theirs had passed away.

I, of course, was elated. It’s a puppy! Charlee, however, sized up the situation pretty quickly … no more impromptu visits by Nano and Grand Jack simply to take her for a ride or a walk or give her a belly rub or a treat. (Truly, the past six weeks have been bliss for her. But that bliss ended abruptly at 2:30 p.m. today.)

Instead of dropping by just to say hello to Charlee, in walked Nano and Grand Jack with a puppy. Charlee’s perfect world and its revolution around her shattered at that moment. Her brown eyes turned green.

Charlee growled at the tiny “Mac-too” (named by my mom, of course, after the late Mac). After being scolded for an attempted snap at him, Charlee just completely ignored Mac-too and tried to coax Nano and Grand Jack back to reality, i.e., Charlee is the favorite. Needless to say, Nano and Grand Jack’s typical 20-minute visit was plenty for her today.

We definitely have a challenge ahead with changing Charlee’s suddenly green eye color back to its original brown. Stay tuned.