Is the Neon Pink Bandage Noticeable?

It all happened on my second walk around 8:30 a.m. My neighbor’s nine-year-old daughter was walking her two dogs. Technically, these little dogs are called Papillons. But to me, they look like long-haired Chihuahuas. And I hate Chihuahuas.

So, I barked. I may have barked a lot. Anyway, my mother was trying to pull me back, as I may have been a tad bit aggressive and feigned an attack on them. It just seemed that way. I mean, I would never attack, especially when the nine-year-old daughter and her mom always pet me and give me presents.

“What have I done now?” I wondered, as my mother bent down and tried to examine the damage. I, of course, would not allow her to help — at all. Remember, Chihuahuas. I have a duty to continue barking as I intermittently howl in pain.

So, Mom just picked me up and carried me home, scolding me (rather unsympathetically, I would say) along the way. I was still barking. To any observers, it probably appeared as though I was a naughty dog.

So, we get inside. The leg does not seem to be broken. However, I have a dangling, bleeding dewclaw, and it hurts every time I move. My mother Googles “dangling dewclaw.”

So, my mother (my dad is always gone in the summer, and she has to do EVERYTHING) carries me to the car and drives me way up to the Emergency Animal Clinic at Scottsdale and Williams.

Did I mention that I hate going to the vet? You know what happens, and it did. Yes, the thermometer in places it just shouldn’t be. Anyway, guess what you do with a dangling, bleeding dewclaw.

“Oh, well, we will just spray some antiseptic on it, and yank it out.”

I nearly pottied on the floor. They were going to “yank out” the nail. Oh my goodness. I started panting. My heart rate skyrocketed. “Yank?” Sounds onomatopoeic. What a terrible thing to do to a dog all because of “Papillons.” (And did I mention that they had barked first? Really, they did.)

Sigh. I am at home now … recuperating. The vet said bed rest for five to seven days. That’s like telling my mother to go on bed rest … IOW, not happening. Energetic. Can’t miss anything. I mean, there are lizards and baby quails and a baby dove even.

Yes, and those awful Chihuahua lookalikes. But, I’m not one to hold a grudge. In fact, I can hardly wait until my mid-afternoon walk. I just hope no one notices my bandage.

Doctor: What makes you bark at your neighbor’s Chihuahuas?

Charlee: I don’t know. It must be a reflex. 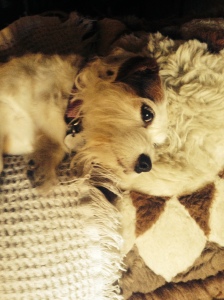 I Don’t Know Why I Bark

Doctor: How does it make you feel to see the Chihuahuas?

Doctor: Why do you think you feel irritated?

Charlee: Well, first of all, they wear bandanas all summer and silly kilt-type jackets all winter.

Doctor: Why does this irritate you?

Charlee: Maybe because they seem so prissy. And don’t forget, they start it all – the barking, I mean. They taunt me.

Doctor: How do you think the neighbors feel when the barking wakes them up?

Doctor: What is your goal in barking? What is it you feel you are accomplishing by barking?

Charlee: They need to know how silly they look wearing scarves. They are male Chihuahuas after all.

Doctor: Do you think perhaps you may be suppressing feelings of attraction?

Doctor: Wasn’t your sister, Bandit, (may she rest in peace) part Chihuahua?

Charlee: She was. But my neighbors are nothing like Bandit. Bandit wore a denim visor.

Doctor: Have you been spayed?

Charlee: I am 10 years old. Is this question even relevant?

Doctor: How old were you when you were spayed?

Charlee: Is this a HIPAA violation? How much is my mom paying you? I think our time is up now. I gotta go potty.